This is a relatively easy walk, with a gradual ascent into the countryside overlooking Rosehearty. Before heading inland, the route kicks off at the old harbour and samples a section of the coastal path. There are interesting visits to historical sites along the way. 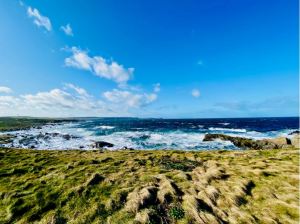 This is a very interesting historical ramble around and about the old Buchan fishing village of Rosehearty. In addition, there are some great coastal views, particularly along a wide bay on the Moray Firth towards Aberdour, Pennan and Troup Head. To the east of the harbour, there is a fine beach with very attractive, light coloured sand. Apparently, the settlement was founded by a group of shipwrecked Danes in the 14thC and later much expanded in the 17thC to support a booming fishing industry, with the local Forbes landowner, who funded the harbour developments, extracting a much hated 20% “tax” on all landings. With the coming of the railway to Fraserburgh in the 19thC, and consequent access to wider markets, Rosehearty Harbour, always a difficult approach due to offshore rocks, was largely abandoned to small craft. In the early part of the walk, along the coastal path, we pass an unusual tall white building, the “Rosehearty Tower”, now a private residence. The “bomb-proof” tower originally functioned as an observation tower for offshore aerial bombing training. At the rural mid-point on the route we visit an imposing early 19thC doocot built in “mock-Gothic” style at Mounthooly, a little hillock with great views all around. On the return section to Rosehearty, our first diversion, at Peathill, is to the ruin of the Auld Pitsligo Parish Kirk. There are some very interesting 18thC gravestones with references to the Jacobite rebellions. The church building itself is notable for its elaborate “bird-cage” bell-cot, and large raised “Laird’s Loft”, to separate the local landed gentry from the ordinary worshippers. Our final point of interest, overlooking the village, is the very imposing ruin of Pitsligo Castle, clearly once a very grand place indeed. Unfortunately, the Forbes lairds, as staunch Jacobites, chose the wrong side, and the castle was sacked by Hanoverian troops after the Battle of Culloden before being partially dismantled for building materials. In the 1980’s, Malcolm Forbes, of Forbes Magazine, with family roots in the area, funded works to stabilise the ruin.